After finishing my degree in Social Anthropology in the UK, I went to Georgia for one year. I went there as an EVS (European Volunteer Service) volunteer to work with a regional environmental organisation called CENN, the Caucasus Environmental NGO Network. I still remember arriving in Tbilisi, the capital, for the first time. It was 2 in the morning and my colleague-to-be was very nicely waiting for me, with the driver, Zaza. I remember thinking, “Zaza? What a funny name!” and asking my colleague how to say ‘thank you’ in Georgian. “Madloba”. It took me about a week to be able to remember and pronounce that word.

‘didi madloba’ – thank you very much

After a few weeks I went on a training workshop for the all the EVS volunteers who had arrived in the region at the same time as me. We were all a bit lost and confused by our first weeks in the region… some of us because of cultural issues (why can’t Georgians be on time? Why do Georgian men stare at us, western European girls all the time?), some of us because of the workload (my organisation isn’t giving me anything to do?). I was quite lost too. Every one in my organisation spoke Georgian to each other and I was sitting in an office in front of a computer every day with nothing to do for too many hours. During the training we set ourselves goals: things that we wanted to achieve or learn during our EVS. My goals were clear: 1. to explore the region and culture, 2. to be an active and useful part of my organisation and 3. to understand better the dynamics of the NGO world and development discourse. I think I achieved all these goals, and much more. However cheesy this sounds, I believe that my EVS made me grow a lot. It is hard to give credit to what I learnt and experienced in this time in one article, but I will do my best…

The South Caucasus, which comprises of Georgia, Armenia and Azerbaijan, is located between Europe and Asia. Historically, the borders between the three countries were not paid much attention to, since people from all three nations were scattered all-over the region. For instance, Armenians built an important part of Tbilisi, the capital city of Georgia. However, although they lived and still live as neighbours, they are very distinct people with very different languages and religions. Across the centuries, they were repeatedly invaded by surrounding empires: the Ottomans, Persians and Russians. The impact of these invasions is still felt in the region’s cultures today. Then, in the 20th Century, they became a part of the Soviet Union and experienced another major change in their societies. Indeed, Russian became the main language all across the region, the attitude to work and education changed, the way natural resources were managed changed, much local knowledge was lost and entire villages were relocated.

After the end of the Soviet Union, Georgia underwent difficult times with a major civil war and some of its regions declaring independence. Over the last ten years however, the situation has become a lot more stable and Georgia has been opening more to the rest of the world every day. All my colleagues and Georgian friends were born in the Soviet Union and I find it fascinating how they have lived through so many important systemic changes in their lifetime. I really enjoyed living in a country that is changing so dynamically. For instance, whilst I was there, grand building projects were developing everywhere, my colleague had her first ever massage and the first Zara in Tbilisi opened in my street. Paypal arrived and people could buy things on Internet. We ate falafel pitas for lunch. 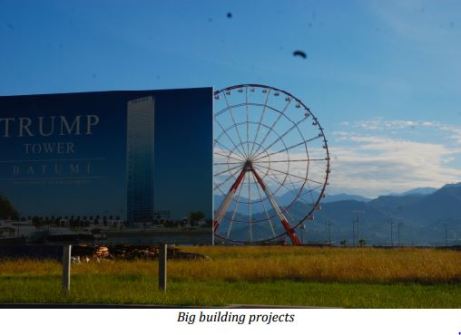 After nearly two months of working at CENN, I was still finding it very hard to convince people to give me work in my office. I still felt that I hadn’t been acknowledged as a CENN member and that no one really cared that I was there and that I had come all the way from the UK to work with them. And then, we celebrated my colleague Chanchika’s birthday during the lunch hour. This involved, as for any other Georgian birthday, drinking wine, a bit of cognac and eating lots of Georgian cheese bread. It also involved toasting to Chanchika, his family, to friends, to love, to health, to CENN, to Georgia, etc… And then, one of my colleagues made a toast for me. He said that he was grateful that I was there to work with them and hoping that I would learn a lot and enjoy my stay in Georgia. This was the first time that a colleague welcomed me into their team and formally acknowledged my presence in the office. After two months of trying hard to become a part of the team and even harder to get assignments, I realised that in Georgia, welcoming someone required a toast rather than a formal business meeting.

From Chanchika’s birthday onwards, I started getting more and more work, until I even had too much of it. I became a real CENN staff member. I led a campaign in schools to enhance ‘community-based climate change adaptation’. I organized awareness raising events, film screenings as well as international conferences and workshops. I even got to give a talk to young environmentalists from Iran, Turkey, Armenia and Georgia on environmental campaigning.

One of the projects I worked on was to develop a National Action Plan for Georgia to reduce pollution from its transport sector. This gave me the opportunity to work with experts from UNEP and the International Energy Agency, and to organize events for decision makers in Georgia. It was fascinating to be in a room with so many different agendas, from Georgia’s energy security to public health to people’s own jobs at stake. These were negotiations that had the potential to completely change Georgia’s carfleet and air quality, of which 90% is currently over 10 years old. However, there was also a lot of potential for simply copy pasting solutions from elsewhere and to fail designing solutions tailored to Georgia’s own economic, social and cultural context. Or that would fail to reflect Georgia’s own advancement in the domain, such as an informal but very innovating car recycling system and a large increase in the use of natural gas. 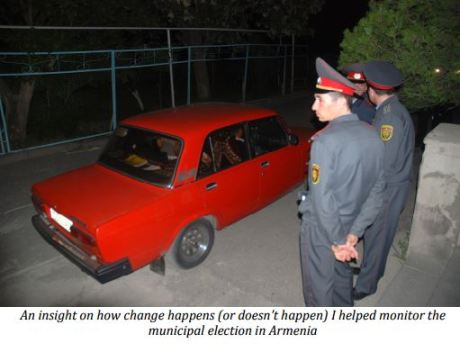 I remember being told by my Dutch flatmates at the beginning of my stay that most foreigners who come to Georgia end up staying longer than expected or returning. Having travelled quite a bit in my life, I was unconvinced at the time that Georgia could convince me more than elsewhere. Today however, I can definitely say that I will be going back. Gabrielle Fenton spent 10 months working at CENN (www.cenn.org) in Tbilisi, Georgia, from Sept 2012 until July 2013. Her sending organisation was Look East Wild Earth (www.lookeast.org.uk) and her placement was funded by European Voluntary Service.